So you spent hours putting up the tree, decorating the house, baking those holiday treats and searching for the perfect gifts for everyone on your list...now, it's YOU time.

What better way to get into the holiday spirit, and treat YOURSELF than a few sexy, romantic, heart melting holiday reads?!?! 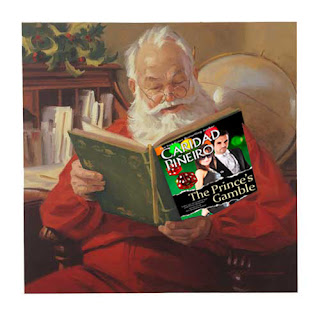 Check out a few that are on my wish list...

If You Believe in Me
Natalie J. Damschroder

Three years ago, Amber Benedict fell in love with Kale Riker and pledged to wait for him to return from the military. Even though she rarely hears from him, she’s steadfast in her belief: he’s coming home to her, and soon. Then the government tells Kale’s family that he’s missing in action, and they have given him up for dead.

Kale Riker has been away from civilization and Amber for three long years. He’s been promised he can retire his commission when he completes his current mission, but now he’s seriously wounded and facing a long recovery. Worse still, security risks force a communications blackout, leaving him no way to let Amber know he's alive.

Can Amber hold out against an entire town pushing her to give up on love while Kale fights to get back home to her before Christmas?

A Cinderella Christmas Carol (Suddenly Cinderella)
Hope Tarr
There’s nothing On Top managing editor Cynthia “Starr” Starling hates more than Christmas. With an important deadline looming, plus her dreaded Christmas Day birthday, Starr just wants the holiday to end. But when she wakes up Christmas Eve night to the ghost of Christmas Past, Present, and Future—all in the form of the super-hot Matt Landry, the new art director—she knows she’s in for a long night.

Matt is the one person on Starr’s team she can’t boss around and the only one she doesn’t need to. He’s also her employee and totally off limits, even if he does seem interested. Though he’s seven years younger and all kinds of forbidden fruit, he’s the form the Powers That Be decided she’d be receptive to.

Because they have a message for her: learn the true meaning of Christmas spirit or risk being alone for the rest of her life.

All I Want for Christmas is a Duke
Delilah Marvelle, and Máire Claremont
A Christmas anthology by two hot names in historical fiction...

Lady Jane left her father, the Earl of Chadwick, and the ton behind to experience life on the stage. After a disastrous marriage, the widow is living on the edge of poverty, determined to guard her heart, when a secret admirer from her past demands a second chance.

Shy and retiring Martin Nicholas Pierce, the Sixth Duke of Somerset, has carried a torch for Lady Jane since her youth, but he is five years her junior. When she married another man, he left for Europe, determined to put her out of his mind. After returning to find Lady Jane free, he vows to replace the memories of her cursed Twelfth Night with a new beginning.

The Twelve Days of Seduction By Máire Claremont

Alexander Hunt, Eighth Duke of Berresford, is aware his ward's governess isn't quite what she seems. Although Miss Flint is beautiful and intelligent, she misrepresented herself to gain employment, and he threatens to give her the sack mere days before Christmas.

Desperate to convince the sexy duke not to tear her from the little girl she's grown to adore, Adriana challenges him to seduce her before the Twelve Days of Christmas have come to an end, although she fears it may cost her heart. Alexander accepts the challenge, unconcerned that he has as much to lose, if not more, than the delectable Miss Flint.

Holiday in Crimson
Patricia Rosemoor
Westbrook Department Store's Christmas party wasn't that wild--until, that is, Santa ended up dead. Now window designer Shelby Corbin is the prime suspect in his murder, and the holidays are anything but festive. If Shelby doesn't figure out who killed Santa, she'll be ringing in the new year behind bars.

Westbrook's impossibly sexy co-owner and CEO Rand McNabb's romantic attentions both thrill and frighten Shelby. But is he really helping her search for the truth about that fatal night? Or does Rand have a deadlier motive for courting the only possible witness to the crime...?

Jane's Gift
Karen Erickson
A devastating house fire cost Jane Clark nearly everything: her husband, her confidence, and her looks, with the physical scars marbling her body. Now, two years later, she’s living and healing back in her childhood hometown of Lone Pine Lake. The upcoming holidays are the perfect opportunity to bring some Christmas cheer into her young children’s lives, starting with a visit to the firehouse, where her brother’s best friend has offered to help quell their residual fears.

Lone Pine’s resident playboy, fire captain Christian Nelson is happy with his single-guy lifestyle. He’s an everyday local hero, so he’s never wanting for attention around the holidays. But when Jane Clark shows up, Chris is immediately drawn to the beautiful widow—even though kids and commitment have never been his style.

Despite her brother’s warnings about his friend’s playboy status and dangerous occupation, Jane can’t help but fall for the gorgeous fire captain. The holidays are a time of new beginnings, but can two scarred people find the strength to let go of their pasts to live in the present, when a lifetime together might be the sweetest gift of all?

Another year, another Christmas party...another dead Santa! Run down by eight tiny reindeer and a sleigh, was he killed by accident—or was it murder?

At last season’s party, it was Pippa McNabb’s faithless Santa-clad husband who died—so after another St. Nick ends up dead, she’s at the top of the police suspect list. When hunky sleigh-driver Sky Thornton offers his help to find the real culprit, she accepts, and soon finds herself snuggled up with him before a holiday fire—and falling hard for the blue-eyed stranger. But how does he know so much about her...?

Suddenly she isn’t certain if her mysterious new lover is attempting to help her clear her name, trying to frame her for a murder he might have committed...or working to win her heart forever.

Jackson Pierce didn’t make his fortune entertaining every half-cocked idea, especially one involving diaper changes. Not even the cute brunette who links him to the baby in her arms can crack his icy heart.

A baby on the doorstep is the least of Hannah Woods’s problems—she has to find the baby’s uncle, or the child will end up in foster care. She sleuths her way to the reclusive CEO’s doorstep only to find six feet of holiday sexy—and a door slammed in her face. But when Jackson comes around and urges they marry for little Emily’s sake, Hannah finds herself falling for the jaded billionaire and wishing for a holiday miracle of their own…

Secret Santa Baby
Robin Covington
Tessa Stoneman hasn’t been able to get long-time friend and business partner Nicholas Boone out of her head since they shared a single kiss in college. Even when she dated Nicholas’s best friend. Now that she’s giving up her position at GameNerdz to strike out on her own—and now that she’s single—maybe it’s the right time to see if there’s still something between them.

Nicholas knows once Tessa leaves the company she helped found, they might drift apart. Before she starts her own company in the new year, he wants to woo the woman he fell in love with during college. So he poses as her Secret Santa, gifts her with items from the song “Santa Baby,” and plans a big reveal at the company holiday party. But when his best friend wants to rekindle his romance with Tessa, will Nicholas lose his last chance?

The Prince's Gamble
Caridad Pineiro
Prince Alexander Ivanov is scrambling to save his reputation and his livelihood. One of the Russian Nights Casino's hostesses has disappeared, and his business is suddenly under investigation by the FBI for associations with the mob and money laundering.

Special Agent Kathleen Martinez has no patience with rich, entitled aristocrats, especially one like Alexander Ivanov whom she believes is involved in the vicious human trafficking ring which she'd tried—and failed—to shut down two years earlier. With a second chance to bring him to justice, she goes undercover in the casino, but instead of facing the villain she expected, she finds herself battling a sizzling attraction to the man.

Now, forced to work together to trace the source of the illegal activities, the danger—and the passion between them—grows out of control, and they slowly begin to realize the biggest danger isn’t to the casino, it’s to their lives…and to their hearts.

They sound awesome, right? So go on, treat yourself. Trust me. You deserve it!

Have a happy and safe holiday!!

Posted by Paige Cuccaro at 11:38 AM No comments:

Get Entangled Under the Mistletoe!


This holiday season, get Entangled Under the Mistletoe! 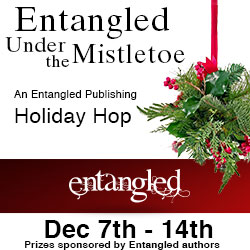 For my part, I'm giving away a signed copy of HELLSBANE.

Twenty-three-year-old Emma Jane Hellsbane just found out she’s not human, at least, not only human. She’s half angel, too, and now Heaven’s got a job for her: round up all the Fallen angels and their red-skinned, horned devil-demon minions and boot their butts back into the abyss. Only problem? The demons and their Fallen masters fight back…and they don’t fight fair.
Luckily for Emma, she can put a stop to the constant threat of having her head hacked off if she figures out which Fallen angel is her father—and then kill him before he kills her. Of course, in the meantime, she’ll have to avoid accidentally seducing her angelic mentor, help an old friend conquer his own Fallen sperm donor, and basically save the world from a cataclysmic divine smack down.

No one said being Heaven’s bounty hunter would be easy. But with a name like Hellsbane, Emma Jane was born for the job

The hop runs from December 7th to 14th, and make sure to visit all these authors’ blogs during that week!
You really don’t want to miss these giveaways.

Don’t forget to check out what the other authors participating in the hop are giving away!