Yeah, okay, so I did something REALLY stupid. I agreed to do a reading of my book, HELLSBANE, next week (Feb 9), at the

OSU Libraries Read Aloud hosted by the Ohioana Library Associate
I am deathly afraid of speaking to groups and reading...well that's just asking for the chance to make a fool of myself. But...I said I would (even made a bit of a pain of myself) so I'm gonna do it! Ugh...
The upside to this horrible turn of events is that I had to order some of my book on the wildly unlikely possibility that someone at the reading, after hearing me stammer and stutter through my own writing, will want to buy a copy.
So, check it out...they came!!! 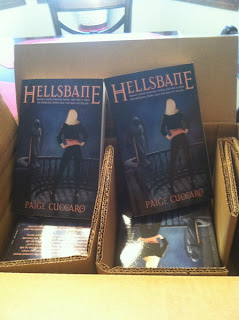 It's like friggin' Christmas!!!! Yay!!!!!! goodygoodygoodygoody....boomchuckalaca-boomchuckalac-boomchuckalaca-Yah!
*ahem*
Anyway...so there's that.
Hey...ifin' you're in the Columbus/ OSU area and want to come witness the train wreck...here's the semi-official announcement.
-------
Dear Colleagues,
We are excited to announce that nationally bestselling Central Ohio Fiction Writers, Susan Gee Hieno, Donna MacMeans, and Paige Cuccaro, will be reading on Ohioana’s behalf on February 9th at the OSU Libraries Read Aloud from 3:00 to 4:00 p.m. in Room 202, the Mortar Board Room, of the Thompson Library.  The program is free and everyone is welcome!

Get in the mood for Valentine’s Day and enjoy some fun with
Susan, Donna, and Paige.
Susan Gee Hieno http://susangh.com/home.html will read from her soon to be release book Passion and Pretense. Reviewers have declared her four star rated book - witty, funny, and sexy pure reading indulgence. Susan career with writing for the theatre, but her love of the English Regency time period led her to writing historical romance. In 2008 she won Romance Writers of America's Golden Heart Award for Best Regency Historical. Susan had three published novels and has contributed to at least one anthology. Susan lives in rural Ohio, a minister’s wife, and a mother of two children.

Donna MacMeans http://www.donnamacmeans.com/ will read from her recently release book Redeeming the Rogue and forthcoming book The Casanova Code. Donna is a mild-mannered certified public accountant with a small tax practice. But come April 16th, she transform into an impassioned writer of sexy historical romance novels, paranormals and romantic suspense. Her manuscript, The Education of Mrs. Brimley, won the coveted Golden Heart medallion for Best Long Historical Manuscript presented by Romance Writers of America.  Penguin Books purchased it and launched her career as a published. She has also won multiple other awards including the Romantic Times Reviewers Choice Award for Historical Love & Laughter.

Paige Cuccaro http://www.paigecuccaro.com/ will read from her newly released book, Hellsbane. Garnering 5 star reviews and reviewer’s Top Pick, Hellsbane is described as a thrilling read with just enough fast-paced action and excitement to leave you hanging onto the edge of your seat. Cuccarro has a way of pulling you into a scene--I was smelling the brimstone, and feeling the black goo that at one time was a demon, say readers. Paige Cuccaro spends her days as a Navy wife and mother, writing her books here in central Ohio. Her road to publication was not without its ups and downs, but with several books out under her penname, Alison Paige, and the launch of her new urban fantasy 3 book series, Hellsbane, she is well on her way to achieving her dreams.