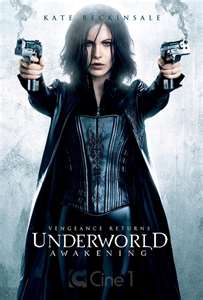 Not the moive I hoped it would be

Let me begin by saying that I hate 3D movies. I don’t understand Hollywood’s love affair with the hokey (and yes, even with all the “advanced technology” it still feels hokey to me) film technique. I have yet to walk out of a 3D movie and think “WOW, that movie was soooo much better because of the 3D.” In fact, without exception I have walked out of every 3D moving bitching about how it wasn’t worth the higher ticket price and that the 3D crap was more distracting than enhancing. Plus the glasses SUCK!


*sigh*
Okay, on to the actual movie.


Yeah. It was no Underworld, or Underworld Evolution, or Underworld Rise of the Lycans. In fact, if you were hoping for the next installment in a series that you thought had been wrapped up and were happily surprised to hear might have more to tell…you’re likely to be very disappointed.
Underworld: Awakening is a continuation of the Underworld series only in that the lead character, Selene is in it. Except for some flash back clips from the previous movies Awakening ignores all the old characters, the ancient vampires and werewolves and replaces them with watered down imitations, or in Michael’s case, fuzzy CGI and shots of where he’d just been…


*And movie guys…Believe me when I say as a woman and a movie go-er, bigger doesn’t always mean better. Sometimes bigger is just a huge waste of space.* (For those who’ve seen the movie, you know what I’m talking about.)
The fight scenes are okay, the filming (except for the STUPID 3D!!) was up to the Underworld standard I was used to. But the plot is little more than a vehicle for the studio to launch a totally new storyline by riding on the coattails of the successfully wrapped Underworld series. Clearly they hoped the fan base would forgive the bait and switch technique. I think they would’ve done better just to start from scratch rather than sully a nice series with this filler movie.
For diehard Underworld fans, you can probably skip this movie and watch the next—which will no doubt follow—knowing it has NOTHING to do with the original storyline you enjoyed.

Did you see this moive? What did you think? Agree, disagree?﻿
Posted by Paige Cuccaro at 10:55 AM