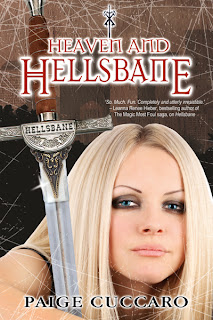 Now for an exclusive excerpt of the upcoming installment of the HELLSBANE series,

HEAVEN AND HELLSBANE
Book 2
I used to think feeling others’ emotions was some sort of freakish gift. I’d even turned it into a pretty successful moneymaker as an Intuitive Consciousness Explorer—otherwise known as a psychic. I knew now it was just one of the many quirky side effects of being the bastard offspring of an angel. Yay me.
Dan turned his gaze back to Eli. He couldn’t let it go. “This is a date, man. Private time. But you knew that, didn’t you? You knew we’d been planning this for the past week. You knew the last time we tried this, too. And the time before that.”
“Emma forfeited her private time when she picked up that sword,” Eli said. “She’s a warrior for our Father now. She’s never off duty.”
“Bullshit,” Dan said, then glanced around and lowered his voice. “She’d have private time—time alone with me—if you’d stay away long enough for her to take a breath.”
I followed Dan’s gaze, scanning the faces at the nearby tables, worried we were drawing attention. No one looked our way. No one had even noticed Eli’s sudden arrival. But humans weren’t meant to notice the comings and goings of angels. As beautiful as they were, angels were like extras in a movie, part of the background and easily overlooked.
“C’mon, Dan,” I said. “You know Eli’s not doing it on purpose.”
Dan glowered at me, frustration still tight across his face. “You sure about that?”
“Yes,” I said, but I couldn’t blame him for doubting it. Eli had been a near constant presence in my life since the moment I met him a year ago. He’d been the magister of a dear friend, an illorum like me, Tommy Saint James. It was Tommy who’d brought me to him, introduced us. But even Tommy had been concerned about Eli and me working together.
And with good reason.
Eli was everything angels were supposed to be: tall, broad shouldered, with a strong, athletic build. He had the looks that could steal a woman’s breath, keep her speechless for seconds. His silky black hair hung in soft waves over his forehead, enhancing his startlingly pale cloud-blue eyes.
But I’d gotten used to his looks a long time ago. It was the man inside the pretty wrapping that played havoc with my good sense. He was my friend and so much more. I trusted him with my life. But there was nothing romantic between us.
There couldn’t be.
I reached across the table to touch Dan’s arm. “This is my life. It sucks. Believe me, I know. But I don’t have a choice, and neither does Eli. If it were up to me, nothing would get in the way of spending time with you. You believe that, right?”
Dan’s warm maple-brown eyes met mine, his anger softening at the corners. “Yeah. Of course I believe you. But him…?”

I hope you enjoyed that little sneak peak! Does it sound like things are going the way you expected? What are you most hoping for with Emma, Eli, Dan and the angels? I'd love to hear about it! Leave a comment.

There are lots more excerpts to come! Some from the HELLSBANE prequel, Commencement where we see how it all got started. And some from HELLSBANE book 1 to help remember how far Emma Jane has come.

And check back tomorrow to see the writing cave of  Nicola Marsh, author of BRASH, from Entangled Publishing

Posted by Paige Cuccaro at 7:24 AM