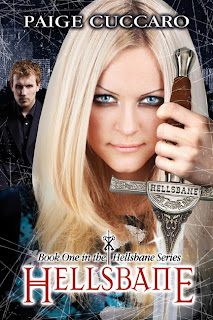 Twenty-three-year-old Emma Jane Hellsbane just found out she’s not human, at least, not only human. She’s half angel, too, and now Heaven’s got a job for her: round up all the Fallen angels and their red-skinned, horned devil-demon minions and boot their butts back into the abyss. Only problem? The demons and their Fallen masters fight back…and they don’t fight fair.


Luckily for Emma, she can put a stop to the constant threat of having her head hacked off if she figures out which Fallen angel is her father—and then kill him before he kills her. Of course, in the meantime, she’ll have to avoid accidentally seducing her angelic mentor, help an old friend conquer his own Fallen sperm donor, and basically save the world from a cataclysmic divine smack down.
No one said being Heaven’s bounty hunter would be easy. But with a name like Hellsbane, Emma Jane was born for the job.
Now for an excerpt from the first installment of the HELLSBANE series,

“So you’ve been doing this, hunting demons, since high school?” I asked.
“Demons and the fallen angels who called them up to do their bidding.” Tommy exhaled, as though suddenly feeling the weight of the past eight years. “I tried to forget. Tried to pretend it didn’t happen. But they wouldn’t let me. They kept hounding me, bugging me to fight.”
“Demons?”
“No. Angels,” he said. “The ones that will talk to us...incessantly. They’re called magisters. They wanted me to train. To pick up the fight where Coach Clark left off. I didn’t want to. I didn’t know what it meant. So I ran. It was six years before I saw my parents again. They’d thought I was dead. Wanted me to move back home. But I couldn’t. I couldn’t expose them to the kind of life I had.”
“They don’t know?”
He shook his head. “They’d never believe me if I tried to explain anyway. They’re safer this way.”
“Must be nice.” He couldn’t have given me the same protection?
Tommy looked away. “If there’d been anywhere else safe I could’ve gone today, I swear...”
He looked at me, and I could see in his eyes he meant it. He hated what he’d gotten me mixed up in. Trouble was, I still wasn’t sure exactly what that was.
“What do they want, the demons? Why are they trying to kill you?”
“Us.” He winced, hugging his arm around his belly, holding his side. “They’ll be after you now, too. And they want us dead. They want to kill us before we kill them and send their fallen masters to the abyss.”
I laughed. Not because I thought anything was particularly funny, but because my brain had finally reached its capacity to accept the unacceptable, and no other reaction occurred to me. “You know how insane this all sounds, right? This can’t be for real. It can’t be. I mean, I don’t even believe in this God and angel junk.”
“Yeah?” He sucked in a sharp breath and used the doorjamb to leverage himself up to his feet, holding his side. After a second or two, he straightened. “Well, you’re about to become a believer, real quick.”
“You can’t make me.” Geez, I sounded like an eight-year-old.
“That’s what I thought. And then the demons came, and came, and came. And Eli kept dogging me, saying I had to train.” He stepped around me on his way to the door, limping, moving slower than he had when he’d come in. “The demons can find you anywhere, Emma Jane. They feel you the way you and I can feel each other when we first come together. You know, the way your stomach rolls?”
“The rollercoaster thing? You feel that too?”
He smiled his star-jock smile. “Yeah. I feel it, too. That’s how I knew you were nephilim in high school. I felt it. Felt it around Coach Clark, too. ’Course, I didn’t know what it was until Eli explained it. Before that it was kind of...confusing.”
“That explains a lot,” I said. “Who’s Eli?”
He turned and opened the door. “Eli will keep you alive. Unfortunately, if I don’t get to some holy water soon, I won’t survive to introduce you.”

So there it is. The first hint Emma had of things to come. I hope you enjoyed it! Want to read more? Hellsbane is available in print or e-format. You can pick up your copy today!
[ Amazon ] [ B&N ]  [ iTunes ]

There are lots more excerpts to come! More from the HELLSBANE and some exclusive sneak peeks at the next installment HEAVEN AND HELLSBANE releasing Aug 27st
Read the first excerpt I posted HERE!

And check back tomorrow to see the writing cave of  Nina Croft, author of the hot new Contemporary Romance, Losing Control, from Entangled Publishing